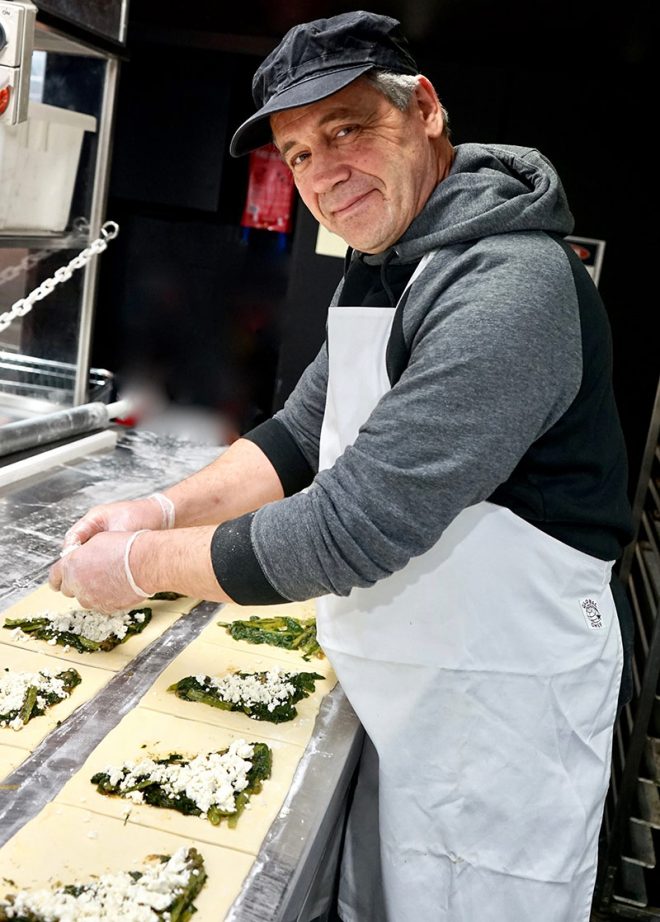 A Slice of Greece

Pastry expert Christos Kasimadas is the talented chef behind the deliciously authentic greek pies and pastries which are hot sellers at Frewville and Pasadena.

Christos has a big following for his handmade pita which he skilfully crafts every day in the kitchens at Frewville and Pasadena. In Greek, a “pita” is a pie and can be both sweet and savoury. Greek pie recipes typically call for filo pastry dough. They are quite time consuming to make but Christos has it down pat.

“Pita in Greek, since the ancient times, is known as anything that has flour and is flat. In ancient Greece, the pita was part of the daily diet.”

Christos, who is from Corfu, is a trained school teacher who arrived here in 2012 to teach Greek in schools around Adelaide. “I was appointed here by the Greek government to help teachers at schools wherever they
had Greek in the curriculum and I did that for five years,” he says. “After that I couldn’t leave because I had to wait until one of my daughters (he has two, aged 19 and 14) finishes school here.”

Christos was making his pita in a restaurant when Adelaide’s finest supermarkets owner Spero Chapley discovered the showstopper pies. “Spero was eating there one day there, he was eating my pie, and he asked my restaurant owner friend if he knew anyone who could make pie like that. Spero gave me a call and that was it.”

Christos is a talented chef, not limited to pies, and cooking is in his blood. “My family, since forever, they all cooked. My mother cooked the everyday things and my father used to cook more special things,” he says. “My mother and my grandmother, they used to do pies. My background is north of Greece, Macedonia, and my hometown is the epicentre of pies in Greece.”