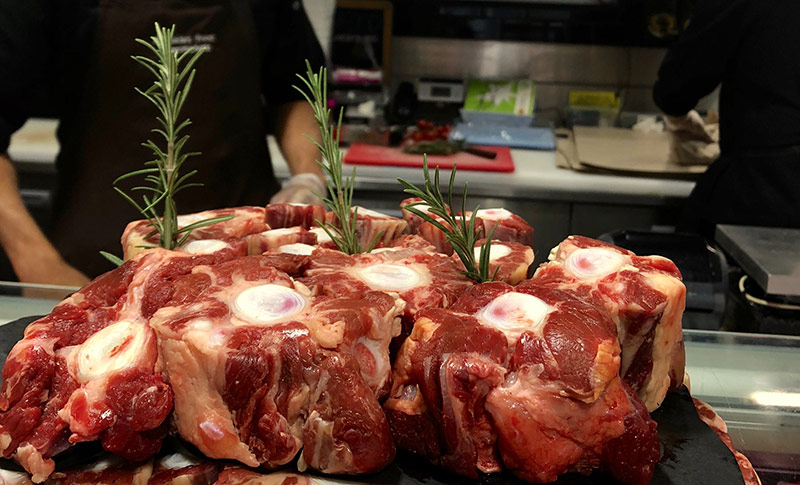 Low and slow for Winter

“People are hungrier in winter, they want something substantial like big-flavoured stews and casseroles which really call for secondary cuts,” he says.

Secondary cuts are the lesser-known and cheaper cuts of meat such as brisket, shin, oxtail, flank steak, rump cap and shanks.

Prime cuts such as scotch fillet, porterhouse and T-bone steak will always be popular but under-valued secondary cuts are economical and packed with flavour.

The cuts are becoming more popular with home cooks thanks to the rise of the nose-to-tail food movement which promotes the consumption of the whole animal as opposed to just the choice parts.

Butcher’s Block at Frewville and Pasadena stocks all the traditional prime cuts along with a range of secondary cuts ideal for winter cooking.

“There’s been a big pick up in interest with beef spare ribs which go well cooked slow for at least four hours, until they are fall-off-the-bone tender and ox cheek is definitely an ‘in thing’, we can’t get enough of them,” Des says.

“Brisket is really popular for casseroles, smoking and low, slow barbecuing and osso bucco (a marrow-filled veal or beef shin bone) is always a huge favourite which is rich and delicious when cooked slowly.”

Des says one of his favourite alternative cuts is skirt steak which is a cut of beef taken below the rib and between the brisket and flank. Skirt, a cut which used to be thrown away, is ideal for slow chargrilling over charcoal for maximum flavour.

“You have to bone your own meat to get the skirt cut. We might have 20 bodies of beef a week in our butchery and I always say to my team: ‘I want the skirt kept’”, Des says.

“My mum would only ever make stew using skirt, it’s a really rich, delicious, flavoursome meat and needs a nice, slow cook”.

The Butcher’s Block at Frewville and Pasadena have all the meats needed for making soups such as bacon bones, smoked hocks, lamb knuckles and shin on the bone .

“I make a pea and ham soup using hocks and bones and plenty of meat adds plenty of flavour,” Des says.

What is Brisket?
Brisket is the breast or lower chest of the cow and it has a lot of connective tissue which means it can be a bit chewy if it’s not cooked “low and slow”.

It’s perfect for braises, casseroles and smoking and is ideal as a “pulled meat” as it literally pulls apart when cooked. Brisket is long meat cut and is usually cut in half. One end is the Navel End and the Point End. The Navel End is more of a square shape and will slice up more neatly. Des Edwards favours the fattier, chunkier Point End which is great for making rich, satisfying stews and braises.